As part of the creation process of the Rain character rig, the animation team at the Blender Animation Studio has been performing a number of tests and animation exercises to validate its functionality.

During one of these tests, Hjalti laid out a simple side-view obstacle course and had the character running through it. While the exercise looked ok, he could not help himself and a few days later he injected a heartfelt story into it and pitched to the team. So here we are, happy to introduce you to "Coffee Run", our latest short film in production! It's a bit early to talk about a release date, but expect to see it within a couple of months.

This 2d-scroller-inspired short film will take you on the journey of a lifetime, as we sip on a cup of coffee. The short is directed by Hjalti Hjalmarsson and produced by the team at Blender Animation Studio. 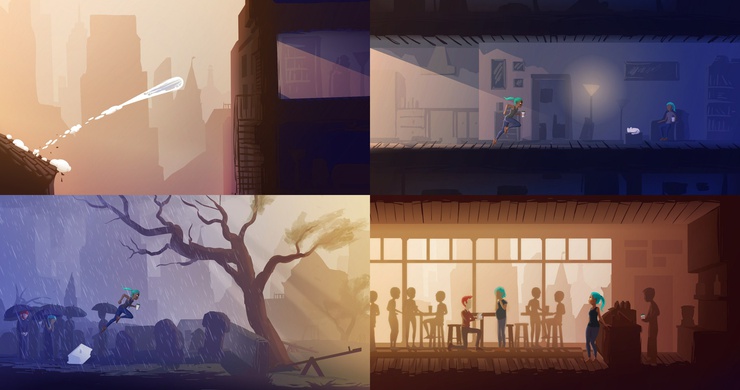 Currently the team is working on animation and visual development, so a lot of exciting stuff is going on! Part of the work done so far is already available here on Blender Cloud, and we will keep sharing as the production continues. Stay tuned for more!

Awesome and amazing. Looking forward to seeing it develop.

could someone explain the story, is it about a woman who killed her child by too much coffee? would be cool if someone clears up =)