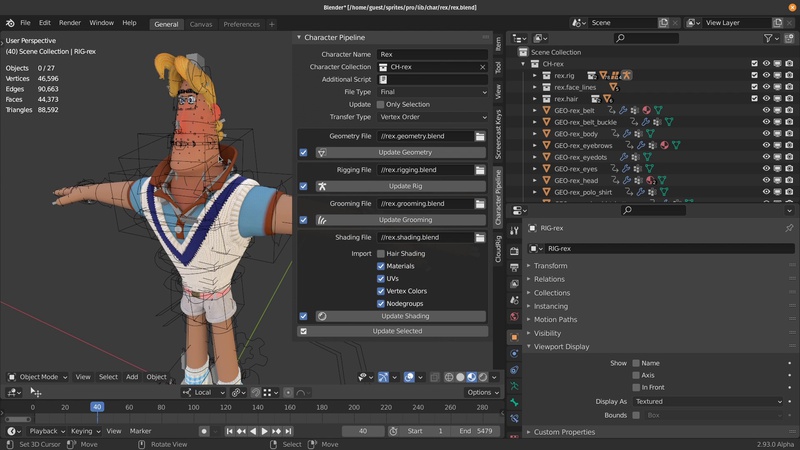 One answer: tell a story influenced by toy stores, Tales from the Crypt, and ‘80s Horror.

Another: you know, fun.

And yet another: stress-test Blender while refining the production pipeline.

A fresh example of the latter: shading artist Simon Thommes worked with rigger
Demeter Dzadik to make a simple, powerful plug-in. It allows different artists to work on various aspects of a character in their own files, then update their work to a shared final file when ready. Because the files aren’t linked, any changes one artist makes won’t influence somebody else’s work. Which means that toes are less likely to be stepped upon (and asses kicked).

Is there more to it than that?

Have a look at Simon’s video for a thorough explanation. Or read his notes.

A couple of caveats: the addon remains a work-in-progress, it's very specific to Blender Studio’s workflow, and requires some knowledge of Python. Having said all that, it's free to download (naturally), and you're free to customize the code to meet your needs. So with all that freedom, why not investigate further? Find the addon here.

Who knows? You might uncover new ways to avoid bruised toes.

Wouldn't this be amazing if all this was implemented with nodes... Just like the workflow diagram... You could have a node for geo/rig/hair and connect them together to get the character...

That's a efficient pipeline right there, I believe that's how Pixar manages assets and characters in Toy Story 1.

Really Nice ! Didn't Ubisoft had release a "network" addon not so long ago ?

I like! I know that many of us from "other" software, got used to linking (aka referencing), but most production pipelines now avoid referencing for the same steps you have outlined, due to potential undesirable residuals.  So, we use a rebuild process, similar to what you have here. Although, I only wish it was this easy to Update/import a rig into another file. I suppose this is one of those unappreciated benefits to the Armature type.

Thx for sharing the tools. I am curious to see how it handles skin weighting info.