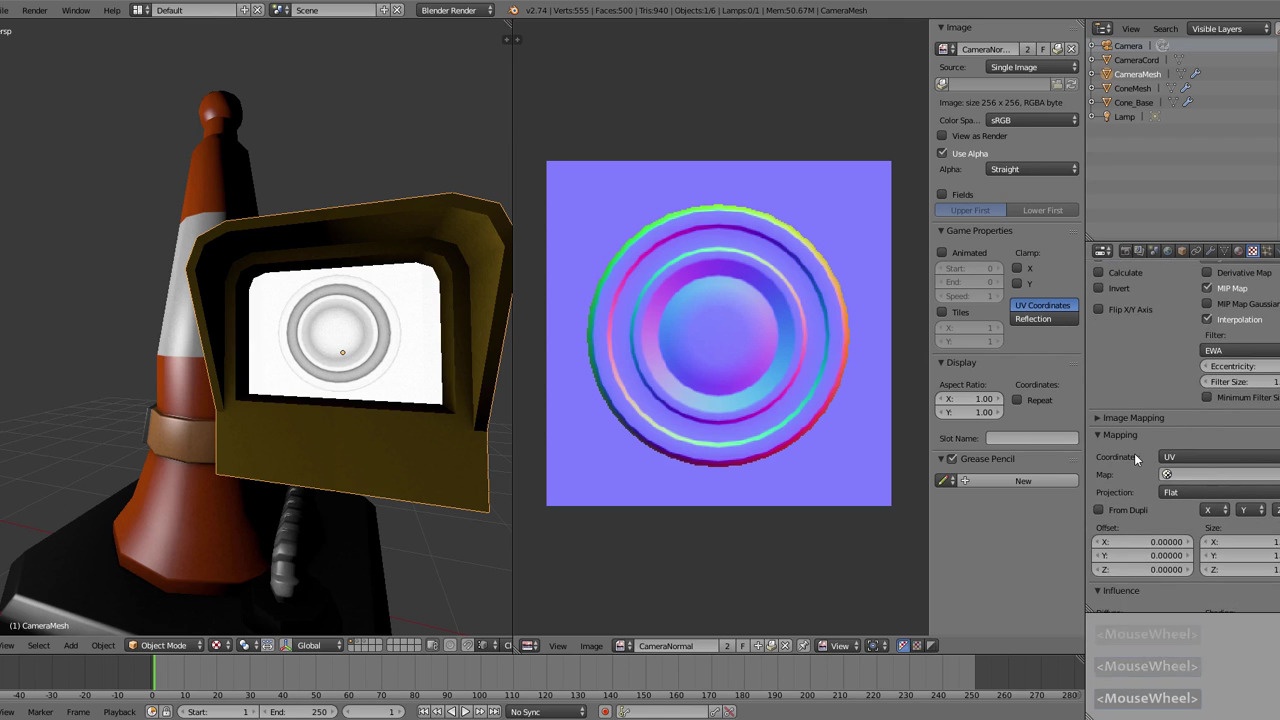 Finishing up by baking out the necessary maps for the camera lens.

Hey, Awesome tutorial thanks for doing this ! I am following the steps one by one, but somehow, the lens of the camera is being "tiled". I tried to tweak around but to no avail. Any ideas ?

@haqadosch: Thanks! Apologies for the late reply here! Just spotted that I dont get notified so i'll need to dig through these occasionally and check if anyone posts. :)

I think the camera is being 'tiled' possibly because the uv's have been scaled outside of the grid area (generally called the 0 to 1 area) of the uv grid. Or is it tiling many more times than that?

Otherwise, in the image editor with the camera image shown press N to open the properties window, then find the 'game properties' and check the boxes marked 'x' and 'y'. This should switch off the 'tiling'.

There is something strange going on with the mirroring and the normals of my objects. It looks like the normals are flipped on the mirrored side. It's happening with the cone (but not the base) and with the camera lens (but not the camera body). I think it might be a different setting in Blender 2.78 (the version I am using) or a bug perhaps as opposed to something I missed or did differently than the tutorial because I downloaded the Blend file "Asset 03 - Baking" (the result file for this whole section of the tutorial), loaded it in Blender and I am seeing the same problems. Here is a screenshot so you see what I mean http://imgur.com/3vurnBG I have tried recalculating normals (Ctrl-N) but that doesn't seem to help. Any ideas?

@mathilde: sounds like you've tried a bunch of sensible ideas so far. I have just opened up the file myself in version 2.78 and it appears to be working fine still. Which I realize isn't particularly helpful!

Is that screenshot from the downloaded version? If possible could you attach the blend file that you're having a problem with here? If not then i'll give you an email address to send to directly. :)

Pack the textures in (File > External Data > Pack All into .blend) and i'll see if I also get that issue and take it from there!

The file I am having issues with is indeed the downloaded file from the tutorial. I have just downloaded it again, to make sure and, yes, it is still causing issues. Just in case, though, I have saved it and uploaded it here: https://s3.us-east-2.amazonaws.com/robotogamesbucket/Asset+03+-+Baking_Mathilde.blend (the only modification I have made to the original is to move the Lamp object). Thanks again for taking a look at this, I very much appreciate it!

@mathilde: That really is strange, i've opened it up and simply moved the lamp and i'm not getting that issue. Very weird. Looks like we're using exactly the same version of blender too.

Out of interest, i wonder if there could be some quirk of operating system perhaps, i'm running on Windows 8.1

I haven't checked it on another operating system yet. I will do this for you in the morning when I get a chance.

If it is some kind of bug perhaps making sure graphics drivers are up to date could be helpful?

Here is how it looks when I opened the file and moved the lamp to the front... https://drive.google.com/open?id=0B3eSxLu1oGOeRTh6NWdtNk9wUmc

I will look further into it later! Sorry it's one of those really rare headscratchers!!! What on Earth could be going on!?

@mathilde: hello, just tried it again from another computer, on linux mint, that file still seems to look fine on my end.

Perhaps it is a graphics card issue? Apologies, I'm clutching at straws so to speak at this point!

@Aidy_Burrows: Thank you for trying the file on different computers and operating systems! I did some more investigating on my end and this is what I found. I was able to export the asset as FBX and import it in Unity (which is the game engine I am using) and the asset looks great! The normals are all pointing in the directions they should be. So the problem seems isolated to rendering in Blender, specifically.

I am using a Macbook Pro 2013 with Mac OS Sierra (10.12.4) and an NVIDIA GeForce GT 750M 2048MB graphics card. I tried downloading the latest Mac drivers from the NVIDIA site (based on this thread: https://blender.stackexchange.com/questions/7458/macbook-pro-rendering-issue) but that didn't seem to help. I am still getting the issue looking at the file in blender on Mac.

I do have dual boot with Bootcamp on my Mac so I booted over to Windows and downloaded Blender 2.78c and I didn't get any issues there, the normals look just as they should! So it seems the issue is specifically limited to Blender on Mac. I may have stumbled onto a rendering bug on the Mac side...

@mathilde: oh wow, you've done some awesome investigation there, I think maybe a bug is worth logging there. I seem to recall Mac does have some hurdles possibly when it comes to graphics drivers though I maybe mis-remembering. Or that could be resolved now. In any case, I suppose a bug should be in order here.... https://developer.blender.org/maniphest/project/2/

Hopefully it's a simple fix in the Blender code or something in a driver that Apple will roll out soon perhaps! :) Aidy.

@Aidy_Burrows: OK, I filed a bug here: https://developer.blender.org/T51699 And I also tested it on a different MacBook Pro but it didn't have the problem so it seems confined specifically to my version or my graphics card. In any case, I included all that info in the bug report so I hope that helps!

@mathilde: that's very helpful!!! Logging these kinds of things after all gives blender the best chance of being as robust and stable as possible! :) Aidy.

First, thanks for making this tutorial. It has really helped with my understanding how game sprites are created.

That being said, I managed to advance my way to this chapter and all the way through the Baking portion of the tutorial with the only real issue being that sometimes I would bake onto the wrong UV image and would have to back up to an earlier save point and start again.

Now I've reached the point where your tutorial tries to clean up the cone mesh (around time index 5:16) and I have this peculiar behavior that even though I select the Ambient Occlusion UV Image, the bake affects the BasicColor image converting the cone portion to an ambient occlusion. I've retraced my steps several times and tried following the tutorial precisely with the same effect.

Hope you can give me a clue as to what I am doing wrong.

@drbtech: Hi! Great that you're getting through successfully so far.

Something to watch out for when swapping the texture to bake onto is to make sure you have faces selected when you switch the texture.

Blender has something that it calls 'texfaces' you can have lots of faces with different textures assigned to them. It is these texfaces that blender is referencing to check what image that face should be baked to.

So hopefully that doesn't sound too confusing, the process would be to first select the faces you would like to bake, then in the uv/image editor choose the image you want to bake to. Then when you hit bake it should bake to that image.

Possibly when you're switching textures in the uv/image editor the faces of the 3d model aren't selected. :)